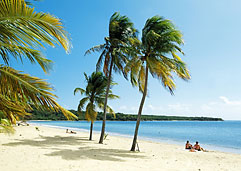 Experience the world’s clearest bioluminescent bay. When the U.S. Navy packed up and left Vieques in 2003, after more than 60 years, it left something behind: unspoiled nature. Land once used for bombing practice is now designated as a national wildlife refuge. So far there are only a few mega-resorts like those found on the Puerto Rican mainland—instead, you’ll find homey inns like the aptly named Great Escape B&B, where breakfast is served poolside (from $115). There are only two notable towns (the population is less than 10,000): Isabel Segunda on the northern side of the island, and the far smaller Esperanza on the south. The effect is that when you reach a beach at the end of a dirt road here, your reward is having the sand largely to yourself. Playa de la Chiva (Blue Beach) attracts daytime snorkelers and divers, but the real reason Vieques belongs on your bucket list is Puerto Mosquito. Of the seven bioluminescent bays on the planet, Puerto Mosquito is the most impressive, thanks to the clarity and brightness of its waters. Schedule a moonless night for a swim or kayak tour and you’ll be greeted by billions of micro-organisms called dinoflagellates that ignite the water with a magical blue-green glow (Aqua Frenzy Kayaks, from $30 per person). It’s like swimming in a watercolor painting.